What NOT to Do On Your Company Facebook Page

Not So Social Strategy

There are many fine lines when it comes to maintaining a social media page for a company:

Social media marketers have all asked similar questions to these at one point or another, followed by research to find a clearer answer. But if you ever need a prime example of what NOT to do on social media for a company, Applebee’s recent controversy and social media suicide can help you decipher where to obviously draw the line.

If you don’t know what happened, here’s a quick recap and a link to a story of the full debacle before I cover all of the “don’ts” of their experience.

A server at Applebee’s was left a note by a pastor on a receipt saying that she gives God 10% so why should she give the waitress more. One of the server’s co-workers posted a picture of this receipt on Reddit for the world to see (posted below). Then the employee who posted the picture was soon fired as this story caught media attention due to a claimed customer privacy policy.

Ok, well that’s fairly understandable if that privacy policy is legit. But that didn’t seem to be the case.

Applebee’s themselves posted a picture on Facebook a few weeks earlier of a note that a customer left praising the company (posted below) with the customer’s name in clear site on the post. This was obviously contradicting their own policies that the server was fired for. This was only the beginning before all hell broke loose on Facebook due to bad marketing strategy. 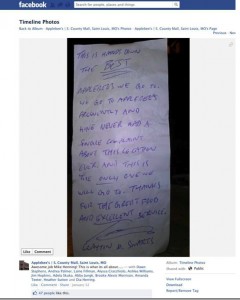 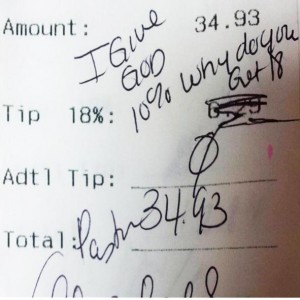 Follower’s of this story began posting thousands of comments on Applebee’s Facebook saying that the restaurant was being hypocritical and the server should be re-hired.

What NOT to Do

Here’s where Applebee’s messed up. Whoever is behind their social media presence decided they had had enough of all the negative comments on Facebook and took it upon themselves at 2:00 in the morning to start commenting and arguing with the Facebook fans. It got so out of hand that they then decided to start deleting people’s comments, which didn’t go unnoticed.

Follower’s noticing they were being deleted:

This went on for hours and days stirring up more and more negative media attention as Applebee’s tried all the wrong tactics to combat this situation. If you have a lot of time on your hands, it’s comical (yet sad?) to sit down and read the posts on both sides to see just how out of hand this got.

Whoever maintains their Facebook page made plenty of fatal mistakes we should all learn from during this incident. Here is a list of “not-to-dos” taken from the terrifyingly horrid mistakes Applebee’s made.