One of the Best Marketing Books Ever – Purple Cow

You might want to watch this video as you’re getting ready for bed because today we’re going to do a little bit of story telling and reading together. The focus of this video is one of the most simple but most influential concepts of my entire marketing career. In 2012, Seth Godin released the now famous book called Purple Cow. The whole premise of Purple Cow–it’s a pretty thin book–can be summed up in one quick passage that I want to share with you so bare with me, it’s just a couple of paragraphs.

“The new “p” (as in the five “P”s of marketing) is Purple Cow.
When my family and I were driving through France a few years ago we were enchanted by the jundreds of storybook cows grazing on picturesque pastures right next to the highway. For dozens of kilometers we all gazed out of the window marveling about how beautiful everything was. Then within 20 minutes we started ignoring the cows. The new cows were just like the old ones. What once was amazing was now common. Worse than common. Boring. Cows, after you’ve seen them for a while, are boring. They may be perfect cows, attractive cows, cows with great personalities, cows lit by beautiful light, but they’re still boring. A purple cow, now that would be interesting (for a while).”

So the premise is, no matter how perfect your product is, not matter how exciting your business is today, at some point, it will then become average. If you think about that, after all the products and services that we bought over the years, the entertainment that we watch, the movies, the standard is constantly being raised. Right? Raising the bar as they say. 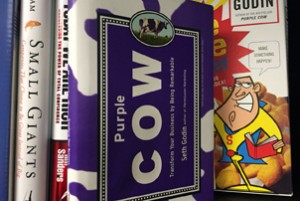 So it’s a brilliant strategy to assess the landscape, understand what average is, and know that you’ve got to stand out from the crowd. Not just a little bit, not just a cow that’s more beautiful than all the other cows. Or a cow that is bigger than all the other cows. A purple cow. Something just radically different. If you can come up with a purple cow, you’re going to stand out in the market place. If that purple cow connects with what the market place wants, your marketing costs are going to go down. Your conversion rate is going to go up. Like I said before, you’re going to stand out in the marketplace.

Don’t do what everyone else does and assess the marketplace and try to blend in. People tend to look at their competitors logos and say well everyone in my industry uses blue so I have to use blue to look like them. Or all the big companies do X so I need to do X. Find out what they do and go dramatically the other way. That’s what Jet Blue did when it launched it’s airline. Actually many decades before that’s what Southwest did when it launched—-it completely stood out from the crowd. Most of the success stories you follow today, the obvious ones like Apple, they surveyed the landscape, the found out what everyone was doing, they found out the conventions, the standards, and they went dramatically the other way.

So Purple Cow is a great book if you can ever get a hold of it. It’s really small. It’s a classic. But this idea stuck with me for a long time. Going on 13 years now since it was published as of the recording of this video and it’s served me very well. Don’t come up with a name like Juicy Results when you’re just trying to blend in with what everybody else is doing. So I encourage you to find out what your Purple Cow is. Whether it’s a product, it’s a company name, it’s a design, it’s an add. Whatever it is. Whenever you find yourself in a crowd as Jimmy Buffet says, it’s time reevaluate what you’re doing.